After a very successful campaign losing only our first match to Clonlisk, we reached the final against Clonlisk. It was game played in perfect condition in St, Brendan`s Park. Our team started very strongly netting a few early goals and kicking a few great points. However, Clonlisk came back into the game with some excellent scores and by half time we were only a point ahead,

After a few minutes rest our team hit the field for the second half in great form, scoring a few great scores and kicking more great points. Clonlisk kept trying to the end but in the end we managed to win by 5 points and retain our trophy. Well done to all 27 players who were part of  our panel. Lets make it three in a row next year !! 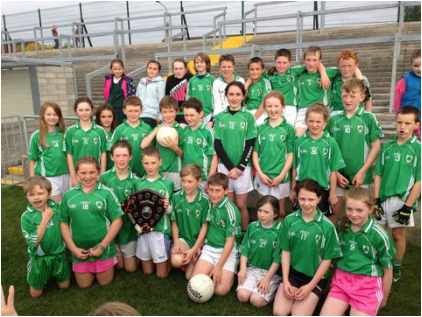 ​In October 2015, the Coolderry senior team beat St. Rynagh`s in the county final. On what was a fabulous achievement, the team called to the school with the Sean Robbin`s Cup an exciting day was had.